< Back to Latest News

What is colder, evaporative cooling or reverse cycle? 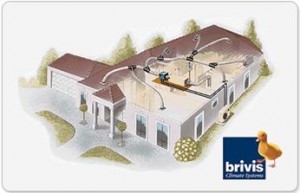 That’s a great question and it all depends on the location and the habits of people in it. If it’s really hot, reverse cycle just will not be able to get a wave going long enough to continually cycle that air down to get to a temperature that you’re really comfortable in.  It will make it relatively comfortable, but it really won’t or if it doesn’t really matter what you punch in your controller. If you’re trying to get that “19 degrees”, it just won’t get there.

Evaporative cooling, on the other hand, won’t work with really high humidity. So in the tropics you’ll never see an evaporative cooler. You really won’t see too much along the coast, but you’ll see it in hot dry areas like Canberra, Melbourne, South Australia and Perth.

If you think about reverse cycle air conditioning, it’s very similar to a fridge. It’s cooling the air down and continually cycling that air down to be cooler. The main difference with evaporative cooling isthat it’s all about relative humidity and its cooling effect. So you are increasing the humidity in the air when it’s hot &dry and you are creating a cooling effect in the home and allowing that air to pass in and blow the hot air out of the house.

So it really depends on where you live. If you are in Canberra or Melbourne and it’s – 44 degrees and it’s really dry, evaporative cooling will work fantastically and give you a really nice cooling effect in the home.

For more information on what’s best to use for a multi-storey structure, watch out for our next blog post that covers those in more detail. You may also want to watch a video version of this article.

Looking for support? Please get in touch and let us help.

We'll help you find a Brivis stockist so you receive the right advice and product, as locally as possible.